Brooklyn Nine-Nine is one of the most relevant shows today. More and more fans not only appreciate the show’s comedic genius but also it is a very timely and great way of tackling modern issues in society. Its impact and importance on the viewers were proven by the rollercoaster ride that has happened regarding the show’s cancellation after the fifth season. The show, being picked up by NBC, has continued to bless the TV screens with the amazing storylines and acting.

So while waiting for the next season, here are 5 things that happened in the show that got way too real.

Although it’s only the second episode of the series, it showed promise for the show’s future. There were several reports of vandalism on police cars, and when Jake and Captain Holt finally caught the culprit, it was revealed that the perp was the son of the deputy commissioner. This leaves Jake in a damned-if-you-do, damned-if-you-don’t situation with arresting the “tagger”. The episode was about choosing to do the right thing, regardless of the consequences. 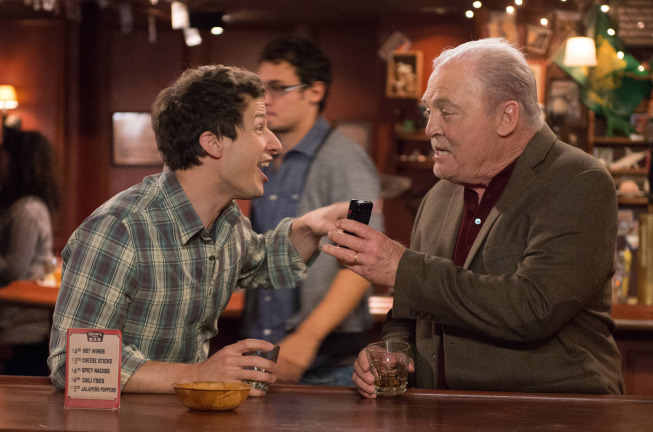 This episode featured Detective Peralta’s favorite cop author, Jimmy Brogan. Jake tried everything to impress the author and in doing so, he unintentionally told Brogan distasteful things about Captain Holt. Jake then convinces Brogan not to post those comments on his research to which Brogan agrees. Jake returns to the precinct and informs Amy that he punched Brogan. Captain Holt, furious about what happened, suspended Jake for the day as punishment. Amy explained that Jake only punched Brogan because he made a homophobic slur about Holt. In my opinion, this is one of the most impressive episodes of the series.

This episode sheds light on the serious problem of racial profiling. In this episode, Sergeant Terry Jeffords (Terry Crews) while off-duty, was looking for her daughter Cagney’s blanket “Moo Moo” in his neighborhood when a cop stopped him. You can literally hear a pin drop when Terry realized what was happening. The racial profiling issue was handled well without going overboard. This episode is easily one of the best and most important episodes to date.

After coming out as bisexual to the squad, Rosa asked for Jake’s help in coming out to her parents. This episode showed the reality and complexity of coming out to the people who are important to oneself. The authenticity of the main focus on the episode was on-point and real for the queer community as well as the straight viewers. This episode definitely stands out among others, what’s even better is Rosa is played by an actress who is bi herself.

This episode was devastating and excruciating. In this episode, Rosa responded to an active shooter situation and was put in grave danger, while the rest of team helplessly waited for updates and further instructions. They did not show the active shooting in the episode, they did, however, focus on the ways the squad tried to cope with the crisis. This episode not only showed the gravity of active shooting situations, but it also showed how to act during these times of crisis when you can’t do anything else to help the ones you love.

Brooklyn Nine-Nine Season 7 is rumored to be released in early 2020.

I live for my cats.

Which Blackpink Member Are You?

The Adorable Comic ”The Adventures of Brutus and Pixie”

How to cook Pork Dinuguan by Riley Miel

With His “Successful” Head Transplants, Is Canavero Almost At His Goal?

What You Need to Know About Boredom – When Boredom Strikes

Reasons to Watch “The Crown”

No Result
View All Result